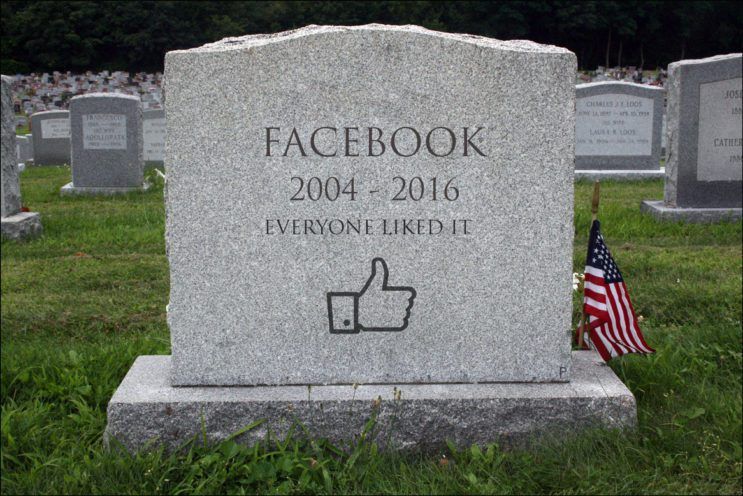 The Decline of Social Media

With Elon Musk’s purchase of Twitter, there’s been a lot of media coverage about social media in general. Many, including myself, think that we’ve reached “peak media” and will see a decline in the use of social media in the coming years. I hope this will open the door for more authentic interactions between people and also a reconnection with faith and prayer.

This may be anecdotal, but I haven’t logged into Facebook in months. I’ve tapered off posting to my Facebook Rosary Prayer channel. When I look at the traffic coming into RosaryMeds from social media, it’s a sliver and hardly worth the effort to post. Facebook is starting to feel like an old mall with space for rent, seasonal “pop-up” stores, and a few people wandering around. Granted, FB still has millions of active users, but it’s nowhere close to what it was a few years ago. It’s no surprise that Facebook has laid off many workers.

The same trend is starting to happen on Twitter. As much as news outlets and politicians want to make a big deal of Elon Musk changing Twitter, I think most people could really care less who’s barking on the service. For years, Twitter has enjoyed a large amount of influence where a tiny group of people could influence companies and politicians. That led to a very toxic “cancel culture” and later a tsunami of wokeness. I think it’s a good direction if Musk’s Twitter is a much smaller virtual town square if agitators and their followers leave the platform.

I bring up Facebook and Twitter because I think they are examples of a fad that is starting to decline. When social media first came onto the scene, people were excited because it offered the ability to connect with old friends and provided shared experiences across the world. But now its artificiality and social manipulation are starting to show. Social media is a lot like a microwave “TV” dinner. They were all the rage when first introduced because they freed people from spending time in the kitchen preparing meals. Microwave meals offer convenience, but they are processed and artificial. Much like how people prefer a home-cooked meal, we’re also looking again for more authentic social experiences the Facebooks of the world fail to provide.

In addition to people once again returning to face-to-face communication and being physically present, I think we’re starting to realize that our faith isn’t something we can “phone in.” A key aspect of Christianity is that we are all part of one body united in Christ Jesus. That body doesn’t function when its members are separated and isolated from each other. Much like how Facebook and Zoom can’t replace an in-person conversation, virtual Masses cannot replace physical presence at Mass.

Why Physical Presence is Important

I’ve talked a lot about the need for people to return to Mass. Besides the importance of receiving sacraments, it is needed to have a vibrant community. You need people physically present to serve as lectors, cantors, altar servers, and Eucharistic ministers. But you also need to physically walk by food donation bins or a Christmas giving tree to see that there are those in need of your charity. You need to talk to someone after Mass to learn that a parishioner is sick and is in need of prayer. You need to be there so that someone new to the parish or new to the faith sees that there is a physical community of brothers and sisters. These examples are why we cannot have an energetic parish or a rich faith over Zoom.

Think about Jesus’ ministry and the thousands of people who followed him. People felt drawn to physically be in his presence and learn from him. God could have chosen to continue to teach us via private revelation and through prophets. God could have “uploaded” all of Jesus’ teachings to humanity. But he didn’t because he knew the value of physical presence and community. People not only found comfort in being close to Jesus but also in being close to one another.

Presence in the Rosary

Meditate on the Fourth Joyful Mystery of the Rosary and its connection to faith and community. Consider that Mary and Joseph valued their sacred traditions and made efforts to praise God as written in the Law. They physically went to the Temple to offer sacrifices and present Jesus. Similarly, God commands us to be physically, mentally, and spiritually present in our faith. Remember, we profess that we believe in “one, holy, Catholic, apostolic Church.” “Catholic” means “universal.” We’re not meant to practice our faith in isolation.

Consider the Second Luminous Mystery of the Rosary. Jesus performed his first public miracle at a wedding where many gathered. I like to think that where many gather, miracles happen. Of course, the biggest miracle takes place every Mass — the transformation of bread and wine into Jesus’ body and blood. But that miracle requires presence to really have a transforming effect. Miracles need witnesses. Otherwise, they are just stories. That is why people aren’t as inspired by miracles that occurred centuries ago. And that is why a live-streamed Mass or a virtual parish is a poor substitute for physical presence.

Now that we’re halfway through Advent, take a moment to ask yourself how present you are in your faith. Has Advent been mostly secular for you revolving around gifts and decorations? Now is the time to really make this season meaningful by consciously centering your day around the coming of Jesus. Be present.