As well intentioned Pope Francis seems to be, he sure can generate a lot of misunderstandings of Church doctrine. I think it’s important to call out these instances and try to clarify them. After all, I don’t want the secular media, who aren’t the most Catholic friendly, having the final word interpreting the pope’s words.

While the pope’s supposed twitter war with Donald Trump has garnered a lot of attention, he also made statements about the use of contraception to combat the Zika virus in South America.  This didn’t get the amount of attention it deserves as it will live well beyond a few tweets between a presidential candidate and the pope. I fear the media will quote this in the future whenever the Catholic Church and contraception are mentioned.  Here’s the specific part of the transcript I want to focus on (bold is mine):

Paloma García Ovejero, Cadena COPE (Spain): Holy Father, for several weeks there’s been a lot of concern in many Latin American countries but also in Europe regarding the Zika virus. The greatest risk would be for pregnant women. There is anguish. Some authorities have proposed abortion, or else to avoiding pregnancy. As regards avoiding pregnancy, on this issue, can the Church take into consideration the concept of “the lesser of two evils?”

Pope Francis: Abortion is not the lesser of two evils. It is a crime. It is to throw someone out in order to save another. That’s what the Mafia does. It is a crime, an absolute evil. On the ‘lesser evil,’ avoiding pregnancy, we are speaking in terms of the conflict between the fifth and sixth commandment. Paul VI, a great man, in a difficult situation in Africa, permitted nuns to use contraceptives in cases of rape.

Here’s the problem. Did Pope Paul VI actually permit nuns in Africa to use contraception? Pope Francis’ argument hangs on the premise that a previous pope had a doctrinally sound reason for doing so. Surely, Pope Francis can refer to some papal document from Pope Paul VI supporting this position right? But it looks like the pope has been hoodwinked by a Catholic urban legend. I came across a great article by Fr. John Zuhlsdorf that examined the root of the “Pope Paul VI permitted nuns to use contraception” myth.

While I encourage you to read the entire article, the tl;dr version is that the scenario of nuns in Africa using contraception was written as a hypothetical example in a theological article about the principle of double effect that was published two years before Paul VI became pope. Like any urban legend, it starts based on some actual event and then little changes to the details are applied.  Like a game of telephone, eventually the story the persists is nothing like the original. There’s even a similar version of this story except it’s St. John Paul II instead of Paul VI and Bosnian nuns replace African nuns.

I understand why the New York Times or the Washington Post may mistakenly report this myth as fact. After all, they probably think Nancy Pelosi is an authority on Catholic doctrine. But I would hope that the pope would be better informed and not repeat an urban legend as truth. What’s worse is that while the words attributed to Paul VI or St. John Paul II are myths, the words of Pope Francis are not. He actually said them and believes that they are rooted in Catholic teachings. I fear that over time the Paul VI myth will be replaced with Pope Francis’ own words.  After all, who needs to keep a myth alive when you have the words straight from the pope’s mouth?

The pope’s off the cuff statements create a challenge for those who want to show the world the reality, truth, and beauty of the Catholic Church.  When the truth in areas like contraception are blurred, it waters down the appeal of authentic Catholicism.  Going back to the book, Rome Sweet Home, that I wrote about recently, part of the reason the Hahn’s left the protestant church was because they started to see inconsistencies and too much gray area in the doctrine.  They saw the Catholic Church as an unwavering rock of well reasoned, biblical doctrine that created an opportunity to truly live in the fullness of God’s grace.  Catholic doctrine may not be the easiest to understand and follow, but at least it’s true.  Speaking of rocks, the office of the pope should be acting as the doctrinal cornerstone as Jesus commanded Peter.  That is why Pope Francis’ interviews, where he creates a lot of confusion, bothers me so much.  When the pope gives off the cuff comments, I feel like he weakens the divinely appointed role and power of the papacy.

Whenever I think of Church doctrine, my thoughts go towards the Fourth Glorious Mystery of the rosary — Mary’s Assumption into Heaven.  I think that one of the reasons God assumed Mary into Heaven is because her duties as our mother extended beyond her earthly life.  God chose her to be our mother for all ages to come.  And like a good mother, Mary desires us to know our faith and see its depth and beauty.  There is so much misinformation out there about the Catholic Church, both intentionally and unintentionally spread.  It’s our responsibility to learn all that we can so we aren’t led astray into a false or watered down sense of our rich faith.  Holy Mary, we pray to you for guidance to learn as much as we can about the Heavenly Kingdom you so greatly want us to enjoy.  Amen.

I received this newsletter from the good people at One More Soul, a website dedicated to fostering God‘s plan for love, chastity, marriage, and family. This is probably the most comprehensive discussion about the dangers of the Health and Human Services Contraception Mandate you will find anywhere. It approaches the issue of forcing people to offer contraceptive coverage in health care plans from multiple fronts — religious, political, philosophical, medical, economic, and sociological.  It has more than just Catholic commentary and theology that you might find in other publications. Many of the articles about the medical, economic, and sociological dangers of artificial contraception are from well-regarded doctors and scientists using data collected from studies and experiments. 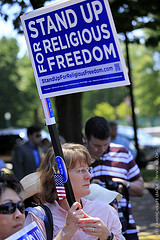 This is a dense, 24-page newsletter so don’t think you can read through it casually in a few minutes. It does demand time and focus to get the most out of these articles. But I believe it is important to read every article to get the full scope of the challenge the faithful face in this world that is growing ever more hostile to people publicly living according to their religious convictions. It’s also important to read the medical articles so that you are aware of just how dangerous birth control pills are and the widespread damage they cause to individuals, marriages, and society.

I urge you to read these articles and share them. But also keep these articles in mind while you pray and meditate over the mysteries of the rosary. Because this battle over the HHS Mandate isn’t just about two large, faceless forces (the government and the Catholic Church) fighting over power and control. The issues of birth control, abortion, and the role of religious liberty has in our society affect millions of people whether it’s a business owner that must choose between his faith or his franchise or the young woman who the media, politicians, and abortion industry has deceived into thinking that a birth control pill is no different from a vitamin pill. Millions of people need your prayers.

Without prayer, we are like the apostles after Jesus’ death — hiding in a locked room scared of doing anything. But with the power of the Holy Spirit, through prayer, we find the strength to go out and publicly proclaim God’s truth like the apostles did on Pentecost which we remember when we pray in the Third Glorious Mystery of the rosary.  Learn the facts, listen to God through prayer, and then let the Holy Spirit work through you to help all those in need (especially those who don’t even know they need help).

I’m going to stop talking now so you have time to go and start reading these articles. Seriously, visit the One More Soul website, bookmark it, share it, sync the newsletter on all your smart phones, e-readers, and tablets and start reading and praying today!