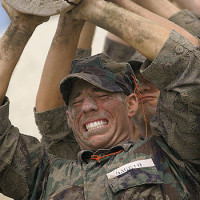 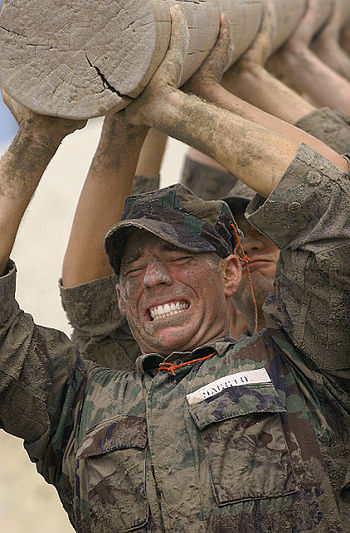 I started listening to The School of Greatness podcasts which focus on self improvement.  In one episode, host Lewis Howes interviewed retired Navy SEAL, Eric Greitens.  Greitens talked about resiliency and how to overcome monumental challenges.  As an example, he used his experience of SEAL training‘s “Hell Week” which is the toughest week of the toughest military training program.  Greitens said that the recruits who focused on the enormity of the challenges of Hell Week became overwhelmed and rang out (quit).  Those who survived focused on accomplishing smaller goals whether it be doing one more push up, running one more mile, or making it one more hour.  Greitens referred to this tactic as segmenting where you keep your focus on a small task you can accomplish rather than focusing and becoming overwhelmed by the big picture.

I really like the idea of segmenting especially when it comes to rosary prayer.  I think too often people avoid praying the rosary because praying five decades seems like a large task that will require too much time and energy.  How many times have you thought:

Excuses like those definitely swirl in my mind whenever I have a few minutes and I haven’t prayed my daily rosary yet.  And it’s easy to let those thoughts consume me and prevent me from praying the rosary.  But if I commit to praying just one decade I find that I will actually pray another, then three, four, and eventually an entire set of mysteries.  Instead of telling myself that I need to pray a whole set of rosary mysteries, I tell myself I’m going to pray a few Hail Marys.  That segmenting mindset breaks that initial set of excuses and in a way allows the Holy Spirit room to work and help me pray the entire rosary.

Jesus teaches us a lot about segmenting in the Fourth Sorrowful Mystery of the rosary.  When he took up the cross, he had a long road to walk and fell multiple times.  In order to die so that he could rise again and redeem us all, he had to walk step by painful step under the cross.  As the First Sorrowful Mystery shows us, Jesus was scared of his coming crucifixion.  But he didn’t let that fear overwhelm him and prevent him from doing God’s will.  He endured the abuse one step at a time.

Jesus showed us that it’s okay to stumble and fall as he did three times under the cross.  But each time Jesus got back up and put one foot in front of the other.  Through his painful example, Jesus shows us how to approach life’s challenges.  While they can appear overwhelming when thought about in their entirety, we can endure by segmenting our fears, worries, and anxiety of the big picture into smaller, more achievable chunks.  Instead of giving up in despair, we just need to tell ourselves to first stand up, and then take one step, and another, and another just as Jesus did under the cross.

Segmenting has positive results beyond rosary prayer and spirituality.  It’s a lifestyle choice.  Let’s face it, life can be overwhelming when you think about everything you need to do.  I constantly face pressures from large work projects and family life.  I’m often alone taking care of my two boys.  Initially, the prospect of feeding, changing, clothing, and playing with them is enough to turn my hair gray.  I can work myself up into a stressed state if I start thinking about all the things that could go wrong (or at least become difficult).  But when I focus on making it to lunch, or a nap, or the next bottle then before I know it I’ve managed to make it through the entire day.  It really all comes down to how we choose to perceive our world.  We can work ourselves up and turn any project or task into a monumental and unbeatable challenge.  Or we can choose to just tackle it in small chunks.  I’ve found that regular rosary prayer really helps keep all of life’s challenges in perspective and prevents me from stirring myself up to the point where I feel overwhelmed.

Here’s a final thought coming from St. Francis (I think).  When someone asked him how to best work towards peace, St. Francis told him that closing the door softly would be a great start.  I don’t know if loud, slamming doors was an issue for St. Francis, but it’s a great lesson — if you want to accomplish large goals, start with small acts.