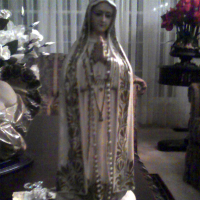 There is a best selling book titled Heaven is for Real about a young child’s glimpse of Heaven.  You may have heard of it since it was also made into a movie.  But have you heard about the much darker prequel, Hell is for Real?  Okay, it’s not really a prequel and it doesn’t go by that title.  I’m talking about the first secret of Fatima when in 1917 Mary showed three Portuguese children a glimpse of Hell.  Since November is dedicated to praying for souls, I want to focus on Heaven, Hell, and Purgatory and how the Fatima Prayer in the rosary is a great tool for praying for souls in need.

First, what is the Fatima Prayer?

While not part of the original tradition of the Rosary or in the original text of the vulgate, many Roman Catholics choose to add it after the Glory Be to the Father after the Blessed Virgin Mary was said to have requested its use during her apparition at Fátima, a miracle deemed “worthy of belief” by the Church. The following text of the prayer appears first in Latin and then in English.

O my Jesus, forgive us our sins, save us from the fires of hell, lead all souls to Heaven, especially those most in need of Thy mercy. Amen.

And now a flashback to my childhood.  In my grade school I remember we had “rosary afternoons” in May where we broke up into small groups to pray the rosary.  The groups were led by an eighth grader who explained how the rosary worked and led a group of seven other students, one from each grade 1st through 7th, through five decades.  When I think back to those childhood rosary days I now recall one prayer being noticeably absent — the Fatima Prayer.

I think my early experience with the rosary was typical for a lot of kids.  Someone thought it was best to shield us from the “scary prayer” that mentions the fires of Hell.  I don’t believe this was done out of a disbelief of the reality of Hell, but more out of a concern of not opening that door of fear or questions from the inquisitive youth.  I’m sure the school didn’t want to receive calls from angry parents about how their kid came home and said everyone is going to Hell or asked if Uncle Barney, who never went to church, was in Hell.

But the avoidance of talking about the afterlife, particularly Purgatory and Hell, didn’t end with the omission of the Fatima Prayer from my grade school’s rosary education.  To this day, it’s a topic that most priests don’t touch with a ten foot pole.  When was the last time you heard a homily about the eternal consequences of sin or the need to receive the Sacrament of Reconciliation?  Over the decades, talking about sin and its consequences was unofficially deemed offensive speech.  A priest cannot teach about sinful behavior without being labeled intolerant, self righteous, and uncompassionate.  That is truly unfortunate because pretending that sin and Hell don’t exist does not make them any less real.  Instead of explaining these scary aspects of reality and providing people with the knowledge, prayers, and the will to confront them, we sweep them under the rug.  Instead of urging people to pray and help those “souls in most need of Thy mercy” we, as a Church in general, let people just dive into the fire because we’re afraid of offending someone.

Praying the rosary is a great way of meditating on the afterlife and praying for souls.  Because talking about sin and Hell may be a taboo topic we have to put extra emphasis on them in our rosary intentions.  After you pray each decade, that Fatima Prayer is that little reminder of Heaven, Hell, and even Purgatory (more on this in a bit).  It encompasses asking for the intercession of the saints in Heaven, praying for at risk souls on earth, and those souls in Purgatory.  Unfortunately, I too often race through the Fatima prayer.  I treat it more like a placeholder while I think about my intentions for the upcoming decade.  But slow down because there’s some heavy stuff in this prayer.

Where does Purgatory factor into the Fatima Prayer?  There is a bit of a mistranslation of this prayer from Portuguese into English according to Br. Alexis Bugnolo:

I would point out that this English translation is not exactly correct; because the Portuguese does not say “souls”, but “little souls”, a term of endearment among Portuguese Catholics for the souls in Purgatory, equivalent to our phrase “poor souls”. The the context of the phrase refers to the deliverance of all souls from purgatory into heaven; and thus never signified universal salvation.

Remember, souls in Purgatory rely on your prayers to get into Heaven.  Imagine knowing that you are saved and you’re so close to entering God’s kingdom but there is nothing you can do unless people on earth pray for you.  That frustration alone must be part of the purification process in Purgatory for your sins.  But now you have a reason to remember those souls in Purgatory every time you pray the Fatima Prayer.  Time to pray it forward because hopefully someday we all may be in a position where we will need those prayers.

In 1917, on the 13th day of each month for six months starting in May, the Blessed Virgin Mary appeared to three children in Fatima, Portugal.  The apparitions at Fatima have particular significance regarding the rosary as Mary asked the children to pray it every day informing them it was the key to peace both personally and globally.  Fatima is where we also get the Fatima Prayer which is prayed at the end of each decade of the rosary.  For those who do not know it, it is very simple and yet extremely powerful:

O my Jesus, forgive us our sins, save us from the fires of hell and lead all souls to heaven, especially those in most need of your mercy.

There is so much power contained in that one little sentence.  As I explain in my upcoming book on the rosary (that’s right, I’m writing a book), this is an incredibly important prayer since you acknowledge the reality of hell and that everyone runs the risk of going there if we choose to live in sin instead of embracing God’s truth.  We beg for God’s mercy that we will be worthy of Heaven and ask for mercy for those who do not live as Jesus calls them.  Take this small prayer seriously as it reminds us of the consequences of sin and the power of God to forgive and save anyone no matter how far they may stray.

If you do not know much about Fatima, I encourage you to take some time reading about it as it is really fascinating and also slightly scary.  You can get a good overview from Wikipedia, Catholic Exchange, or any number of books and DVDs from Amazon.

The Gospel for Sunday, March 6, 2011 is from Matthew 7:21-27.  Jesus tells His disciples that those who hear His message but do not act on it will not enter His kingdom of Heaven.  He calls on all of us to think beyond our earthly existence and realize that we have eternal souls that will live forever in either Heaven or in Hell.  Whenever we pray the First Glorious Mystery of the rosary, we recall that Jesus rose to new life and desires all of us to join Him in Heaven.  But we must make the conscious decision to live for Heaven in this life by staying in a state of grace lest we hear these words from the Gospel, “I never knew you. Depart from me, you evildoers.”

The Gospel tells us that we must not only “talk the talk,” but also “walk the walk.”  Jesus says that it is not enough to hear God’s Word and just proclaim that you love Him.  We must back up our words with actions that put into practice Jesus’ teachings.  What is interesting about this Gospel is that Jesus says He will deny some people entrance into Heaven although they did good works here on earth.  What Jesus means is that those who are cut off from God’s grace by mortal sin will not enter Heaven despite their good deeds.  You cannot erase mortal sin through good deeds alone.  Jesus does not keep a list of ways sins can be forgiven like this:

You could donate a million dollars to charity and that still will not absolve you of sin and bring you back into God’s grace.  The only way to come back into God’s grace is through the Sacrament of Reconciliation.  This sounds harsh, but Jesus wants us to love God first and have good works flow from that grace.  Loving God above all else is what matters, not individual acts of charity.

We must remember that Heaven is our goal.  When we pray the First Glorious Mystery of the rosary we recall that Jesus’ earthly death was not the end but only the beginning of His eternal reign as King of Heaven.  Whether we like it or not, we do have souls that will live forever in either Heaven or Hell.  We cannot opt for a third, neutral option.  And the option between Heaven or Hell is just too important for anyone to leave it up to chance.  I am often scared how relaxed some people are about where they will ultimately end up.  Many believe that if they just live a neutral life, a little good and a little bad (but not too bad), Jesus will cut them a break.  And while Jesus does show mercy, His teachings do not say that people can just live on auto-pilot and just slide into Heaven without a lot of effort.  I’m not saying that we need to constantly stress out about going to Heaven or Hell, but we do need to realize that our actions in this life do determine where we spend all eternity.

Jesus told us that the wise ones will build on solid foundations while the foolish will not.  In other words, the ones who live on solid, moral principles and do good works according to His teachings will see His Heavenly kingdom.  That isn’t difficult to comprehend but can be hard to put into practice.  So when you think about this Gospel or pray the rosary, really question where your focus lies.  Are you focused on living for God’s kingdom by striving to be in a state of grace or for Satan’s kingdom by living in sin?  Or, if you have not set a goal for where to spend all eternity, do you not think it’s time to start?