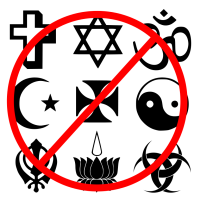 Here are the results of a poll that I’m sure will ruffle a few feathers on both sides of the political and church isle.  A recently released Gallop poll found that one’s “religiousness” is a great predictor of his political affiliation.  It found that those who practices their faith regularly are more likely to lean conservative while someone who is secular leans more liberal.  According to the story on the Blaze:

This is where the anecdotal evidence comes out where someone says the poll isn’t true because their sainted grandmother also votes Democrat.  Or their non church-going uncle is an avid Republican.  Of course there will be exceptions to every poll which is why they are reported in percentages to reveal general trends.  It won’t always reflect someone’s personal experience.  Polls also reveal correlations, but not necessarily causation.  We can’t say with any degree of certainty why nonreligious skew towards voting Democrat while religious lean towards voting Republican.

Now that we have the legal disclaimer out of the way, let’s explore political strategy.  If this poll is true then it explains a lot about our current political climate.  If Democratic policies and their vision for American society appeal more to nonreligious, then the Democratic party will have a vested interest in making society as secular as possible.  A more secular population equals more Democrat votes.  You don’t have to look very hard to see various tactics at play towards that goal:

My point isn’t to just merely bash Democratic strategy.  I’m sure many of my readers could probably come up with an equally long list of Republicans promoting religion to gain votes and influence.  I just want to point out that we need to tread carefully and explore possible underlying motives whenever a politician either promotes or tries to curb the role of religion in public life.  Call me jaded, but I don’t think many politicians actually act on religious issues from deeply held beliefs, but because it will land their party more votes.

When I think of religious vs. nonreligious and Democrat vs. Republican, the Second Glorious Mystery of the rosary comes to mind.  When Jesus ascended into Heaven, He left His mission to build His Church in the hands of His disciples.  Very early in the Acts of the Apostles, the disciples decree that Jesus’ Church wasn’t exclusive to the Jews but open to everyone.  We also must remember, as Jesus’ disciples today, that we must invite all to experience Jesus’ love and saving grace whether they be religious or nonreligious, Democrat or Republican, Dodger fan or Giants fan, etc.  Some groups may put up more of a fight than others to Jesus’ message and our tactics may need to change based on the situation.  But in the end, the mission hasn’t changed since the disciples saw Jesus ascend into Heaven centuries ago — share His love with everyone.  Jesus didn’t discriminate nor fear the response to the truth.  Neither will we.

Oh Lord, may we follow in Jesus’ early disciples footsteps and find the energy to promote His truth.  May we not be afraid to promote that truth with anyone regardless of their political affiliation, nationality, gender, or personality.  May we listen to the guidance of the Holy Spirit to find the right tactics so that Your love best shines forth to all of those who need to hear it.  May we not forget Your charge to the early Church when you ascended into Heaven — spread My Word to the world.