We saw some huge wins for life and liberty this past week.  Texas governor, Rick Perry, signed into law a bill banning abortions after 20 weeks and also sets tighter restrictions on abortion clinics.  Those restrictions are so tight that currently only 5 of the 42 active abortion clinics in Texas meet the standards.  There are some that ask, “why not ban abortion outright?”  Why 20 weeks instead of 19, 18, or 1?  Why allow any abortion clinic to remain open in the state of Texas?  Remember, you don’t change culture overnight.  The culture of death has been working their way through society for decades one law at a time.  And so it will take many years and many small victories for the culture of life to undo the damage.  In the meantime, rejoice over the new lives that won’t be prematurely killed because of this new law.  Let’s hear it for the culture of life!

On a related note, the court granted retailer Hobby Lobby an injunction against the HHS Contraception Mandate.  Hobby Lobby is fighting the mandate on grounds that providing abortion services as part of their health plans violates their religious beliefs.  It looked like Hobby Lobby was going to face thousands of dollars in fines per day since the courts seemed to side with the Obama administration.  But now the courts are going to look into the matter more carefully and while they do so Hobby Lobby won’t face any fines.  The fight is just beginning, but at least it looks like there are cracks developing in the federal government’s push to trample our freedom of religion.  Let’s hear it for religious liberty!

Remember, there is still a long fight ahead of us.  It will require your prayers and your support. 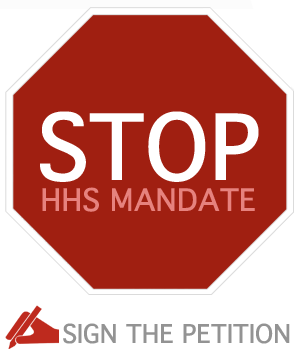