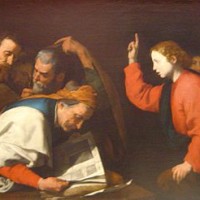 In my last post I talked about how Archbishop Cordileone of San Francisco was battling opponents over his additions to the high school teachers’ hand book about leading a Catholic example while on the job.  He wrote a fantastic clarification about why he added the new clauses and what he hopes to accomplish.  You can read the full letter at Catholic Minority Report.  I know that for many of you who don’t live in the archdiocese of San Francisco, or even the USA, the details of this battle may not hold much interest.  But like many things in life, this controversy does tie back to the rosary (and hence the RosaryMeds website) and provides some thoughts for meditation.  Let’s take a look at the Joyful Mysteries.

I said in my previous post that teaching at a Catholic school is as much of a vocation as it is a career.  I do think God calls people to use their talents specifically at a Catholic school instead of a secular or public school.  The First Joyful Mystery is all about vocations and reflecting on how God calls us to follow the path He sets before us.  We may have our doubts about God’s plan, similar to Mary questioning the angel Gabriel about how she could become the mother of God since she was an unwed virgin.  But like Mary, when we put our faith in God’s plan for us, no matter how outrageous it may seem, He will bestow upon us the graces to triumph.  We pray that we all reflect on our vocation and do what God asks of us even if we have our doubts.

To me, the Visitation is primarily about ministry.  I’ve said in many past articles how Mary had every right to feel like she was a queen to be pampered and honored because she was to become the Mother of God.  But instead she headed off to the countryside proclaiming how she is the handmaiden of the Lord.  Her initial instinct was to go out proclaiming the glory of God when bestowed with God’s grace.  Similarly, Catholic schools are a ministry as well.  They are a place where young minds come to learn, not just reading, science, and mathematics, but also about what it means to be Catholic.  We pray that we remember to show what the Catholic faith professes through our words and actions in a direct, unambiguous way.

The birth of Jesus revolves around the theme of humility.  God humbled himself by not only taking shape in the imperfect human form, but also as a lowly peasant.  And yet, through this unexpected person came God’s perfect revelation as taught by Jesus.  I think the archbishop is asking teachers and also the entire Catholic community in the archdiocese to show a lot of humility for the Church’s teachings as revealed by Jesus Christ and handed down over the years by the Magisterium.  It is difficult to accept and promote teachings that you may personally disagree with or are contrary to societal norms.  I’m not just talking about high school teachers either.  We all probably have a hard time accepting some of the Church’s teachings.  When we pray this mystery of the rosary, we should ask God for the humility to accept His perfect teachings although we may have an imperfect understanding of them.

Jesus’ presentation in the temple focuses on adherence and obedience to the law.  Mary and Joseph waited the prescribed forty days before taking Jesus to the temple.  They also offered a sacrifice of turtledoves as was the custom.  Later, Jesus insists that John baptizes him although Jesus needed no purification.  When I think about many of the objections over the additions to the faculty handbook, I see an absence of the respect of an ancient institution.  The Church hasn’t been secretive about her teachings over the last few millennia nor has it dramatically changed them.  And yet so many people complain about the archbishop’s request to honor the sacred traditions of the Catholic Church in a Catholic school.

When we pray this mystery, we should remember that the Church is an institution that teaches what it teaches for a reason.  Church Scholars have pondered and written brilliant defenses for the Church’s teachings and its rituals over the years.  These “rules” and doctrine of the Church are not arbitrary but are insights into the natural law imprinted on our hearts.  By following those rituals and taking them seriously we follow in Jesus’ footsteps when he, who is the Law, also respected the Law.

When I think about Mary and Joseph finding Jesus in the temple I recall Jesus’ words about needing to be in his father’s house.  What is amazing to me was Mary’s reaction of not understanding what Jesus meant.  What!??  An angel came to Mary and told her she would be the Virgin Mother of God!  Angels proclaimed his birth.  Wise men followed a star and paid homage to him.  What part of Jesus being special does Mary not yet understand?

When I think about those protesting the archbishop’s words I also wonder what part of teaching Catholicism at a Catholic school are they not understanding?  Through all the prayers, Masses, retreats, and religion classes, how are the archbishop’s words, which are essentially the Apostles’ Creed, something new and shocking?

Like the other mysteries, I pray this one for an understanding and acceptance of the Church’s teachings.  I also pray that I see those teachings even in the most unlikely of places.  The scholars were amazed by the knowledge of Jesus Christ as a young boy.  It goes to show that God tries to teach us in many different ways.  We should look for God’s Truth not just in the readings on Sunday, but everywhere around us.  Even a letter of clarification from the archbishop may hold wisdom and offer new insights.