I discuss my thoughts on an article I read regarding how many Catholic in France disagree with the Church’s teachings and feel that Pope Benedict should step down. 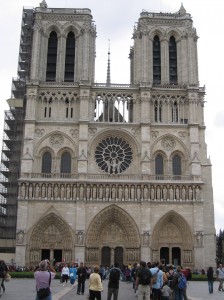 While I usually stay away from commenting on news and current events, I came across this article and felt that I should provide my thoughts.  After all, we pray and meditate on a much deeper and more meaningful level when we tie them into the struggles and concerns of everyday life.  We never pray in a vacuum, but instead thank God for His wondrous deeds and ask Him for guidance.  Remember, prayer is a dialog with God.  And like any conversation, we want to make sure we have something interesting to talk about.  Hopefully this post will give you a little something to think about.

I read this article today on the Catholic Exchange reporting how many Catholics in France are displeased with the Church’s position on many social issues as embodied in many recent statements of Pope Benedict.  The article read:

More than 80 percent of those polled said they want the Church to “modify its position” on contraception and abortion. Le Journal du Dimanche reported that “significant majorities” want the Church to change the teaching on remarriage after divorce as well as homosexuality.

The article goes on to discuss protests in front of Notre Dame cathedral and calls for Pope Benedict to “step down” as pontiff.  I think what a lot of people miss is that the Catholic Church does not arrive at Her stances on various social issues based on popularity polls.  Just because a large group of Catholics disagree with the Church does not make the Church’s views wrong or evil.  The Church is guided by the Holy Spirit who reveals God’s natural law that does not depend on the momentary whims of society.  The Church cannot take something that is a sin and rationalize it as a good just because a large population of society wants it that way.  That is like saying 2+2=5 because that is what many people believe.  No matter how many polls you take or how vocal that “2+2=5” crowd may be, the math will never add up.  Similarly, many brilliant saints and Doctors of the Church have crafted the Church’s doctrine after years of study, debate, and prayer.  You cannot throw their work out the window simply because you do not like their results.

Let’s look at this from a Biblical perspective.  Jesus never asked his apostles for a vote on what He should do.  Jesus did not change his messages and teachings in order to gain favor amongst the Roman and Jewish authorities.  Jesus did not take a poll on whether the adulterous woman should be stoned or not.  In His agony in the garden, Jesus never told God that he discussed the issue over with the apostles and they voted, 10-2 (Judas was absent for the vote), that Jesus should not be arrested.  Instead, Jesus said that He would do God’s will.  I am sure many people would argue that Jesus could have reached many more people if He had just “lightened up” a little and compromised.  But Jesus knew that the truth was something to be boldly proclaimed, not compromised in order to gain popularity.

Many of today’s Catholics lack that humility to put their faith in God and His Church and follow Her laws.  No doubt, the Church puts forth a mighty challenge.  And many of us would rather see the Church bend and preach an easier path than for us to step up and accept that challenge.  It is human nature to hate being wrong and we often like to blame the person who points out our weaknesses.  But we also must keep in mind that the Pope is merely a messenger of the Holy Spirit.  He does not arbitrarily make up rules and replacing him would not somehow reverse universal truths.  In the article, Damian Thompson, the editor of Britain’s Catholic Herald, had this to say about the Pope which I think sums up the Church’s position nicely:

In the spirit of martyrdom, the successor of St Peter chose not to take the easy path but to speak the truth boldly. At a time when he has been recently subjected to sustained assaults in the world’s media, his courage and determination are an inspiring example of genuine love for the suffering.

So let us pray this week to listen to God’s truth.  Instead of wishing that God’s ways were different, easier, and fit inside society’s current trends, let us strive to be the people God asks us to be.  It is not easy to live as Jesus calls us to live and the first step is usually admitting our failings through the Sacrament of Confession.  And let’s face it, when caught between God’s truth and society’s whims, who is going to win in the end?  I don’t see God or His Church bending because of the results of a straw poll.  So let us pray to imitate Jesus, God’s always-faithful servant, and accept His truth.

5 thoughts on “Jesus Does Not Need Straw Polls!”