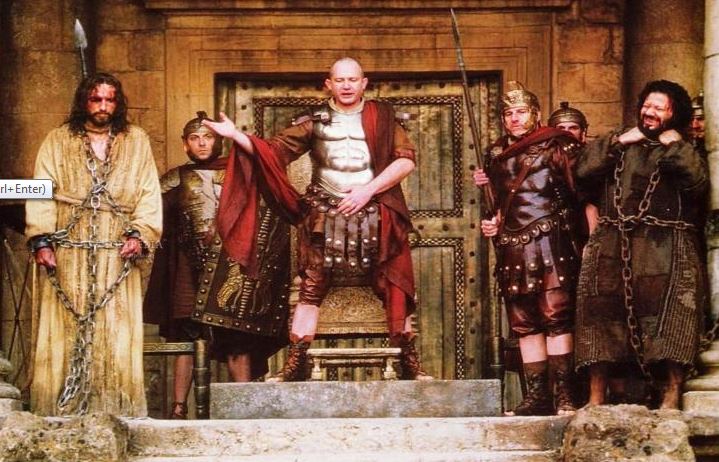 Raising kids means witnessing actions that don’t make much sense. They often choose to fight over silly things, harass one another, and generally create chaos. When asked why one chose to hit the other, the response is all too common — “I don’t know.” Children seem to act on a more instinctual level. Not like us reasonable adults right? Think again. Adults are prone to making unreasonable choices every bit as foolish as children.

Consider those who chose to release Barabbas over Jesus. Often, we meditate on this event when we pray the Second Sorrowful Mystery of the Rosary.

Mark 15:6-15 – Now on the occasion of the feast he used to release to them one prisoner whom they requested. A man called Barabbas was then in prison along with the rebels who had committed murder in a rebellion. The crowd came forward and began to ask him to do for them as he was accustomed. Pilate answered, “Do you want me to release to you the king of the Jews?” For he knew that it was out of envy that the chief priests had handed him over. But the chief priests stirred up the crowd to have him release Barabbas for them instead. Pilate again said to them in reply, “Then what do you want me to do with the man you call the king of the Jews?” They shouted again, “Crucify him.” Pilate said to them, “Why? What evil has he done?” They only shouted the louder, “Crucify him.”  So Pilate, wishing to satisfy the crowd, released Barabbas to them and, after he had Jesus scourged, handed him over to be crucified.

What good reason did the people have choosing to release Barabbas over Jesus? Let’s just take the two choices based on their outward qualities. First, we have Jesus, someone who healed the sick and raised the dead. He showed compassion towards sinners and was a voice for the common person. Then you have Barabbas, a murderer and insurrectionist. It seems like Jesus would have been the obvious choice if people gave their options some thought.

Maybe the people were scared of choosing to free Jesus because that would upset the Pharisees. Maybe they thought that the Pharisees would make their lives difficult and cast them out socially if they learned who voiced their support for Jesus. Some, while they may have liked Jesus, decided to go with the opinions of the learned Pharisees. And others maybe didn’t have any opinion about Jesus or Barabbas and just went with the crowd’s sentiment.

Why we Choose Barabbas

We may look back at the Gospel and wonder why the people made such a foolish decision. But, if we want to see foolishness, we don’t have to look any further than a mirror. How often do we choose to commit sin over following Jesus? We may say how we love Jesus and agree with the Church’s teachings, but then we get caught up in a moment and choose to do something sinful. We choose the “Barabbas option” and we don’t even know why most of the time.

I think many times, we simply like Jesus the same way we like someone’s Facebook post. It’s a very shallow affection for Jesus that is easily broken under a little pressure. Maybe it’s giving into peer pressure to do something wrong or going along with “the crowd” because you don’t want to be cast out of the group for thinking differently. When our knowledge and commitment to Jesus is weak, choosing to sin is all the easier.

We need to build up our commitment to Jesus. This is why we need to pray every day, particularly the Rosary. We also need to read the Bible and Church teachings. We need to build that relationship to resist the temptations to sin, especially when it comes to resisting peer pressure. Our love for Jesus needs to be so strong that we would never think of choosing something that would damage our relationship with him.

Unfortunately, Catholics are in for a rocky time ahead as our world veers away from sharing Catholic values. We’re going to have hard choices to make. Who are we going to follow? Are we going to follow what is trending on social media? What’s being reported on the news? Are we going to blindly follow our political party? None of these are necessarily wrong, but we have to weigh what they want against what Jesus wants. We have to identify what options are like choosing Barabbas and what option is choosing Jesus. Because in the end, when we stand before God, He’s not going to accept an “I don’t know.”