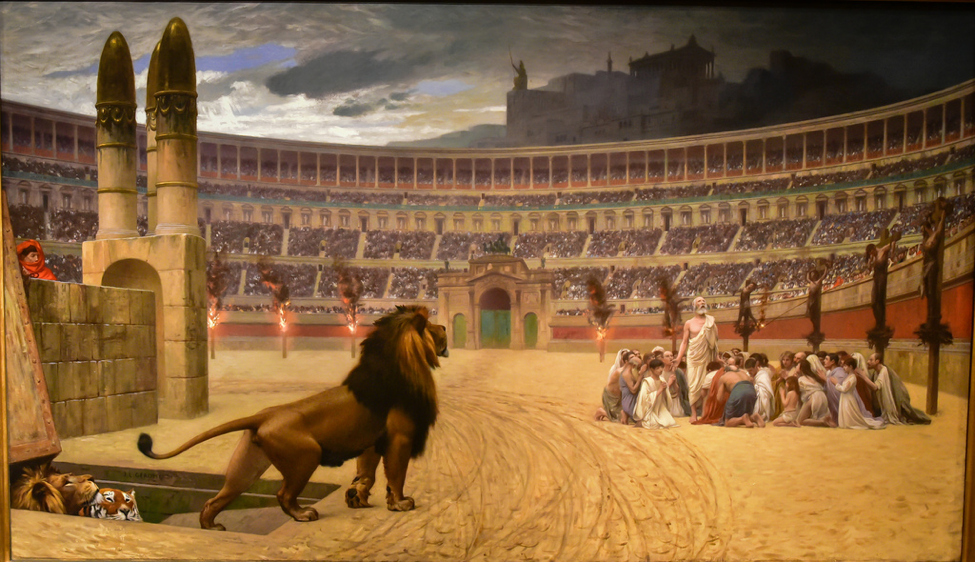 As Christians, particularly Catholics, we tend to fall for the recency bias; thinking that current circumstances are greater than similar situations in the past. This is only natural since these events directly affect us while events in the past affected someone else. Naturally, we’ll place greater emphasis on the events we live through. But that doesn’t mean we can’t learn from the past.

I recently read Quo Vadis by Henryk Sienkiewicz. The book was first published in 1895 and helped earn Henryk a Nobel Prize in literature in 1905. It’s not every day that I read a Nobel Prize-worthy book. Quo Vadis is historical fiction that takes place in the ancient Roman empire under the reign of Nero. It takes you through the journey of a Roman soldier’s encounter with this strange new sect, Christianity, and their peculiar leaders — St. Peter and St. Paul. It concludes with Nero’s burning of Rome and execution of the Christians.

Quo Vadis: A Narrative of the Time of Nero by Henryk Sienkiewicz – Free Ebook (gutenberg.org)

I see many parallels between how the Romans viewed Christians with how modern-day society does. Both wildly misunderstand Christianity. The Romans believed all sorts of false rumors about Christians such as believing they were poisoning the water supply, killing babies in ritual sacrifices, and starting the great fire (it was actually Nero’s doing). When Nero finally martyred them by feeding them to lions, crucifying them, or burning them alive, the Roman people couldn’t believe how calm and at peace the Christians were when facing their deaths. When the Romans actually saw Christians exercising their faith, it shattered their misconceptions. The Christians’ conviction in Jesus Christ and his Gospel is what changed opinions and eventually the empire.

As the abortion debate continues today, we see many misconceptions and lies told about Catholics. The popular line is that we’re all about suppressing women’s rights, we hate anyone living non-Catholic lives, and we want to dictate what people do in the privacy of their homes. The solution to addressing these misconceptions is the same as what Henryk Sienkiewicz wrote about in Quo Vadis — showing the world our faith in Jesus Christ.

I think part of the reason why there are misconceptions about the pro-life position and Catholicism, in general, is that we’re hiding. In Quo Vadis, the Romans’ hearts and minds didn’t change when the Christians remained hidden. When Nero arrested the Christians and publicly executed them, people witnessed the power of the Christian faith. They didn’t choose when or how they would show their faith. But when the time came, they asked themselves “Quo Vadis?” or “where are you going?” They chose to go wherever God led them.

How about us? Are we going where God leads us? With the recent Supreme Court decisions (and not just the overturning of Roe vs. Wade), the world is calling us out. Like Nero, they may think they are leading us to our demise by insulting us, destroying property, and passing laws that undermine pro-life values. We’ve been asking for this for 50 years and now it’s our time to respond as Christians. We win when the world sees the beauty and happiness that comes from publicly following God.

Where do we start? How about returning to Mass? Now is the time to return if you’ve been away from the Mass for a long time or are still watching it remotely. Unlike the working world where many jobs can be done from home, you can’t live the Catholic faith entirely at home. We need the Mass. We need the sacraments. We need to make efforts to live our faith. And we need to act publicly. How can we expect to change the hearts and minds of those who stand against us if we haven’t let God change our hearts and minds first?

One thought on “Where Are You Going?”