The Health and Human Services contraception mandate is behind us now, right?  After all, the Obama administration announced it in January and then made the appropriate accommodations in February.  So everyone is happy, right?  The only people left complaining are those religious, woman-hating extremists who will never be satisfied, right?  That’s probably the impression you get listening to many media sources.  But the truth is that the war for religious liberty is far from over.  We look to the rosary, Mary, the saints, and our Lord Jesus on what we can do to defend ourselves against the assault on our God-given religious freedoms. 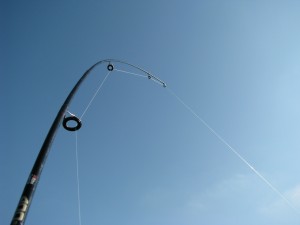 Do you like to fish?  Any experienced angler will tell you that when you hook a big fish you can’t just reel in your line as fast as you can.  Doing so will create too much tension on your line resulting in it snapping and your fish getting away.  Instead, you let the fish run a little followed by reeling it in a little more.  You give the fish ten feet to run, you reel it in eleven feet.  Eventually, the fish gets tired fighting and you’ve brought it close enough to the boat that you can scoop it up in your net and hang it on your wall as your trophy.

Obama treats the contraception mandate much like hooking a big fish.  ObamaCare passed in 2010 after a vigorous fight in both houses of Congress.  But Obama delayed the announcements regarding conscience protection.  Like a good angler, he didn’t try to “reel us all in” at once.  He let the emotions die down a little so the objectors would tire out.  He then announced the contraception mandate in January, 2012.  But he quickly followed with a toothless accommodation speech.  With help from a willing media, the dialog turned from religious freedom to health-care and a “war on women.”  When you take a step back and see what’s happening, you realize that all this give and take is part of a well-orchestrated strategy.  Everything in this campaign is a calculated movement of knowing when to press and when to fall back.  But ultimately the administration is slowly getting what it wants — universal contraception and abortions for anyone and funded by every tax-paying citizen.

When did abortion enter into the conversation?  Again, our political Angler and Chief is just using contraception as his opening attack.  Once you get people reeled in and destroy conscience protection with contraception, it becomes so much easier to extend those policies to cover abortion.  Don’t believe me?  Read this article about how there is nothing in the ObamaCare text that really prevents the federal government from mandating abortion coverage in government-backed health exchanges.  Read the article on how the law states that these health-care exchanges cannot call attention that they even provide abortion services.  Read how Planned Parenthood, the nation’s largest abortion provider, has no issues with the plan and Obama’s many accommodations (that speaks volumes).  Again, Obama appears to give a little to his opponents by delivering fancy speeches and signing worthless executive orders.  But all this time we’re getting reeled into taxpayer-funded abortions.  If that gets put into place, who’s to say that a one-child policy or other abortion mandates won’t make an appearance on Capitol Hill?  We’re getting ever closer to conscience protection and the freedom of religion becoming something caught, killed, gutted, and hung as a trophy as big government’s victory over personal liberty. 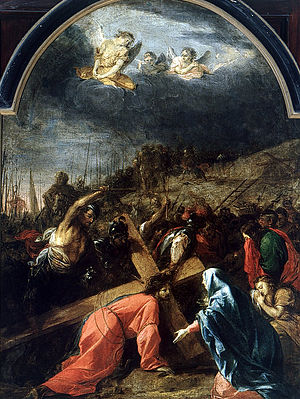 I think we need to look at the Fourth Sorrowful Mystery of the rosary — Jesus Carrying His Cross.  Jesus fell three times during His Passion.  And each time no one from the crowd offered to help Him up.  Everyone stood watching either in sorrow, fear, or contempt.  And while some had pity for Jesus, no one came to help Him.  Maybe they were scared of what the Roman soldiers might do to them.  Maybe they just didn’t want to stand out as a follower of Jesus fearing what their friends and neighbors would think.  Regardless of their motivation, Jesus was left to carry His cross alone while everyone just looked on.

We find ourselves in the same situation with the HHS mandate.  Many times we look around and think it’s someone else’s fight.  We don’t want to get involved and create a lot of tension between friends and family.  We often think that somehow things will just turn out fine so what’s the point of sticking our necks out?  But in not speaking up, in not publicly defending our faith, we are like the bystanders who watched Jesus fall and did nothing to help Him.  Like St. Peter, we deny Jesus and His teachings because we are afraid of what others may think.

Now is not the time to sit around and hope that our situation will magically change.  Remember the Second Joyful Mystery of the rosary — The Visitation.  I mentioned in my meditation how personal prayer is important.  But prayer is not an end in itself.  We must use prayer and the guidance of the Holy Spirit to go out and publicly show God’s glory as Mary did when she visited Elizabeth.  That may mean taking the difficult road of speaking up when remaining silent would be easier.  We may not have wanted this fight much like how the fish doesn’t intend on getting hooked.  But we’re on the hook now.  And our only option is to fight and, with God’s help, snap that line big government has on religious liberty so it can remain free and flourish.