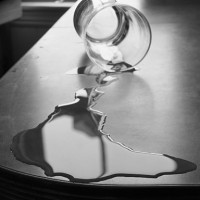 Devotion to my Rosary is a great sign of predestination.

My 2 year old son is at an age where he wants to act like a grownup.  One example is that he often refuses to drink out of a sealed “sippy” cup and wants just a plain glass.  Not only that, he doesn’t want anyone to help him hold it.  Whenever I try to offer a hand to make sure he doesn’t spill or drop the glass, he quickly waves me off.  He also wants to walk around with the glass of water to his play area and refuses to let me carry it for him.  I explain that I should carry it because he will most likely spill it.  In fact, spilling the water is almost a certainty.  But despite my warnings, my son chooses to carry the water glass himself and of course ends up spilling water as he bounces up and down walking.

I wanted to help my son carry and drink his water.  I wanted him to not spill the water on the floor or on himself (who likes being soaking wet?).   But despite all my reasoning, good intentions, and offer to help transport the glass of water safely to the other room, my son ignored my warnings and did it his own way.  And I knew spilled water would be the result, but I let him make his own decision to try something his own way even when I knew it wouldn’t produce the desired result.

This brings us to the idea of predestination.  But what a minute!  Isn’t predestination a protestant belief that Catholics don’t believe in?  Well no.  Catholics also have a concept of predestination although it differs from the protestant belief.  To put it simply, some protestants (Calvinists particularly) believe that since God is all knowing and exists outside of time and space, He has already decided who will get into Heaven and who will end up in Hell.  And because of this knowledge, our destiny has already been decided and there is nothing we can do to change it.

The Catholic’s interpretation of predestination is rooted in the idea that God has a plan for all of us that predestines us to Heaven.  God calls every soul to live in His heavenly kingdom and He gives us the means to get there.  But this is where Catholics and Calvinists split.  For Catholics, God has not predestined anyone to Hell.  Instead, the damned willing reject God’s predestined plan for salvation.  In other words, God lays out the roadmap that leads to Heaven and some people freely choose not to follow it.

Going back to the scenario with my son and the water glass.  I knew that by freely rejecting my advice my son was going to spill the water glass.  But I did not will or cause the water to spill.  I just knew that was going to be the result based on my knowledge of my son’s motor skills and the laws of physics.  Similarly, when we reject God’s predestined plan for us, He knows the unfavorable result of that decision based on his divine knowledge of, well, everything.

What does the rosary have to do with predestination?  Mary promises that those who pray the rosary will have insights into God’s divine roadmap that leads to Heaven.  By praying the rosary, you get a better perspective on whether you are on the right track towards eternal salvation.  This really ties in nicely with many of Mary’s other rosary promises about living a holy life filled with signal graces and the sacraments of the Church.  It’s fitting that talking about predestination is her final promise because it essentially summarizes all the other rosary promises.  If you pray the rosary you put yourself in a position to better understand and follow God’s predestined plan to spend eternity in Heaven.

Keep in mind that praying the rosary doesn’t guarantee salvation.  It’s not like you can pray the rosary every day, sin to your heart’s content, and then expect to get into Heaven.  But if you are truly devoted to the rosary then you understand it isn’t a magic talisman but more of a means of making you better attuned to God’s Will.  And when you do have that understanding, the idea of doing anything counter to God’s Will and losing His grace will seem ludicrous.  Of course, we all have our human weaknesses that cause us to forget, ignore, or doubt this great heavenly goal every once in a while.  But God devised a great system, through the Catholic Church, the sacraments, the rosary, the saints, and the intercessions of our Mother Mary to get back on track.  May we take advantage of the many paths included in God’s predestined plan for us to enjoy the His heavenly kingdom.

Wow, all done with Mary’s 15 rosary promises!  What will I write about next?  Any ideas? 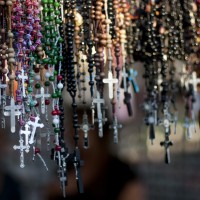 All those who propagate the Holy Rosary shall be aided by me in their necessities.

Remember when I said in my previous post about Mary’s rosary promises seeming like a spiritual infomercial?  Well, I take that back.  This promise proves that the rosary is more like an affiliate marketing campaign.  In affiliate marketing, someone gets a small bonus when they convince someone to sign up for a certain service or buy a specific product.  Mary seems to offer us a sort of spiritual affiliate benefit when we spread the joy of rosary meditation to others.  It’s great to pray the rosary for your own good.  But spreading the rosary has an exponentially greater affect both for you own personal salvation and the Catholic Church as a whole.

Imagine if you were able to convince two other people to start praying the rosary regularly.  Now picture those two people each finding two more to pray the rosary and those people went out and got two more and so on.  It doesn’t take to many levels of propagation before hundreds, maybe thousands, and heck, even millions of people turn to rosary prayer starting from your initial passion for it!  Now can you image a Church fueled by rosary prayer and receiving the graces Mary promises us?  That would be one joyful and sincerely happy world-wide community of believers with the strength to truly change all the ills of this world.  And all because you took one leap of faith to pray the rosary routinely and another leap to share your passion with others.

Your personal rosary prayer will yield much more fruit when you propagate rosary prayer to a wider audience.  But this isn’t because you earn more spiritual points that upgrade you to some higher Catholic membership.  It’s not like Mary sits in Heaven with a clipboard with your personal rosary score.  I don’t think she’s saying, “Well let’s see here.  Brent has convinced 10 people to start praying the rosary, he tries to pray it every weekday, but it looks like he missed some days.  So he’s a silver rosary rewards member which means he gets 3 intercessions a year.”  Not quite.

Like Mary’s other promises, the benefits of this one is more of a logical consequence of praying the rosary devoutly.  When you truly enjoy something or find something valuable, are you more likely to share it with others or keep it hidden?  As Facebook clearly shows, when you are passionate about something you have a tendency to share it with others.  People share their opinions and promote television shows, sports, music, movies, and books all the time (just look at the large number of reviews for any given product on Amazon).  Why would prayer be any different? It is logical that those who are passionate about rosary prayer will also want to share it with others.  If you truly believe in the benefits of rosary prayer and it’s something that gives you great comfort facing life’s challenges, why wouldn’t you want to share it with your friends and family? 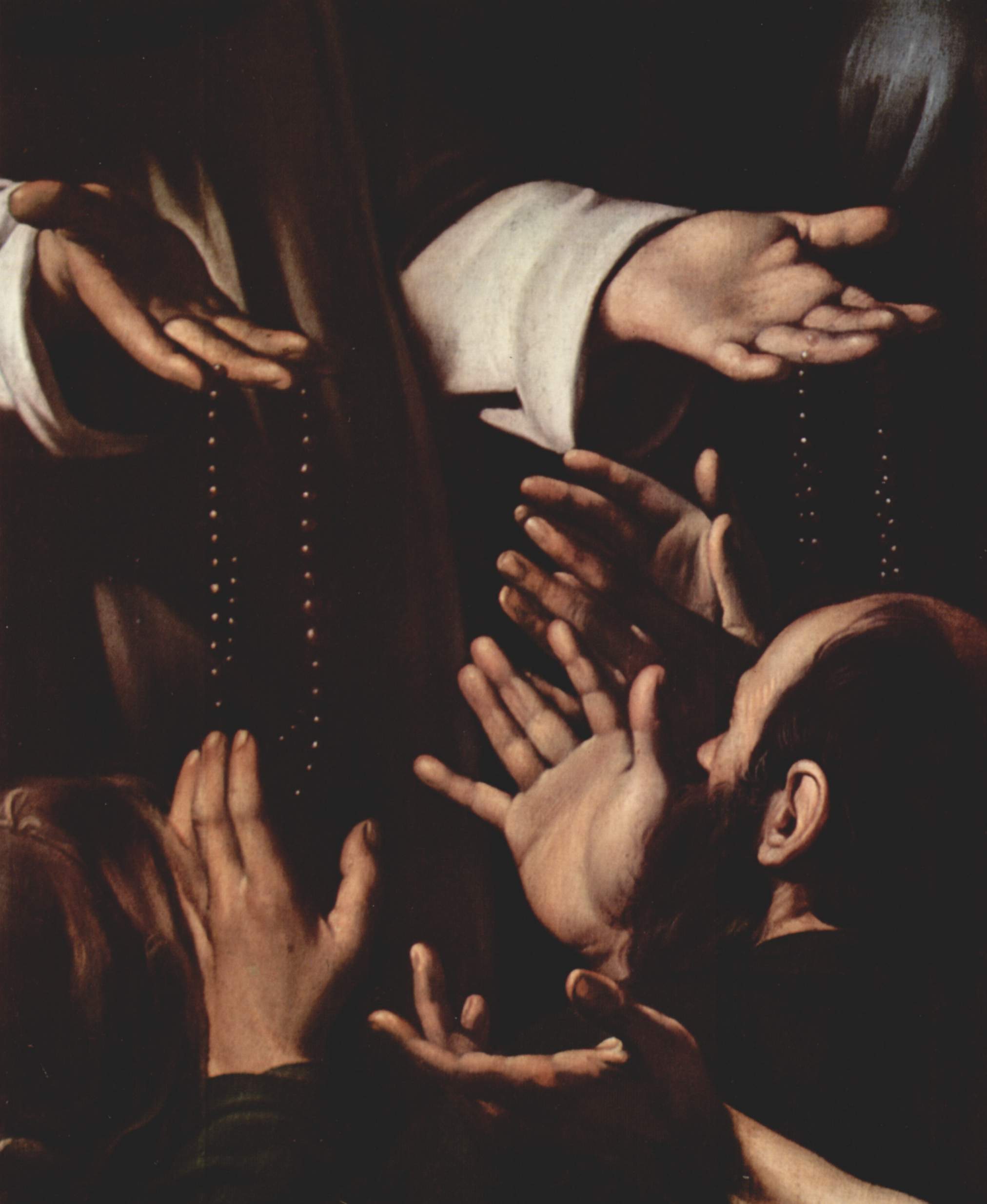 If you are sharing the joy of rosary prayer and meditation then chances are you are already praying it regularly and devoutly.  After all, why would you promote something that doesn’t interest you or doesn’t provide you any value?  As I said in previous articles, those who do pray the rosary devoutly will be better tuned into how Mary is trying to aid them.  She is always trying to reach out to us but it is those who are really trying to listen to her through the rosary who will receive more aid in their necessities.  But it’s not from Mary giving more aid to some than others.  Rather, it’s some people making more of an effort to receive Mary’s aid by making time to listen to her through rosary meditation and being receptive to how she wants to help you.

Now here’s the hard part.  It’s easy for me to write this article and have a few dozen (hopefully hundreds of) people read this.  It is easy for you all to forward an email or share this post (please do that).  We can all sit back and think we did our part in propagating the rosary.  And yes, we did.  But I think that’s putting the quantity of rosary propagation over the quality.  Maybe we should instead make an effort to personally invite a friend or family member to pray the rosary with us.  It may not be the easiest way to propagate rosary prayer, but I think there is value in actually getting a single soul praying the rosary rather than telling hundreds of people who can easily ignore you.  Are you ready to take that challenge?