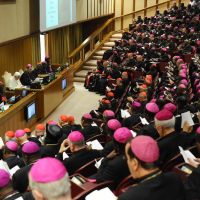 As many of you know, I’m a software engineer.  My career revolves around analyzing the business needs of my employer and designing and implementing a software solution.  Although my job title has the word engineer in it and my degree is in a science, the software development world can be an undisciplined, unscientific mess.  Someone who doesn’t understand software development might be a little uneasy with the number of bugs that are introduced in the process, the amount of code that gets thrown out or rewritten, and how different a final product will look from the initial concept or prototype.  Personally, every good idea I have usually stems from five bad ones — some being immediately dismissed while others I worked on a bit before realizing they weren’t a good fit for what I was trying to accomplish.

I see a lot of parallels between my experience in writing software and the recent Synod on the Family.  A lot of commentary and fuss has been made over the midterm report.  It shows a process where it may appear bishops are make statements and decisions contrary to Church doctrine in topics like divorce and homosexuality.  We have to remember that this report isn’t the finished product nor a definitive statement upholding or changing Church doctrine.

The synod is like a piece of code in progress.  Sometimes I just have to write a few lines of code to steer my thinking in the right direction.  Similarly, I think the bishops have to bring up topics and lines of thought, not with the intent of those thoughts becoming the final word.  Rather, it steers the dialog in different directions to find the right path — the truth of Jesus Christ.

While I’m a little uneasy about the statements being reported, I’m also glad that they are at least being mentioned.  It wouldn’t be much of a synod if the bishops sat down and just regurgitated Church teaching, patted each other on the back for their rote knowledge, and went home.  Again, in the software world I would be highly skeptical of a code’s quality that was completed quickly with no revisions.  How do we know that the developer took into account all the scenarios and details?  Why didn’t he integrate any feedback from his colleagues?  Similarly, the mentioning of ideas that run counter to the Church’s teachings shouldn’t be seen as a challenge to the doctrine but as part of the exploration of these broad and complex topics.  I want my bishops to leave no stone unturned in their search for truth.

Father Robert Barron, who is often very level-headed about topics like this says it best in his recent article:

One of the great mysteries enshrined in the ecclesiology of the Catholic Church is that Christ speaks through the rather messy and unpredictable process of ecclesiastical argument. The Holy Spirit guides the process of course, but he doesn’t undermine or circumvent it. It is precisely in the long, laborious sifting of ideas across time and through disciplined conversation that the truth that God wants to communicate gradually emerges.

The interim report on the Synod represents a very early stage of the sausage-making process and, unsurprisingly, it isn’t pretty. Two more weeks of discussion will follow; then a full year during which the findings of the Synod will be further refined, argued about, and clarified; then the Ordinary Synod on the Family will take place (the one going on now is the Extraordinary Synod), and many more arguments and counter-arguments will be made; finally, some months, perhaps even a year or so, after that, the Pope will write a post-Synodal exhortation summing up the entire process and offering a definitive take on the matter. At that point, I would suggest, something resembling edible sausage will be available for our consumption; until then, we should all be patient and refrain from bloviating.

Now, I would also be naive to think that there aren’t some bishops guided more by politics than the Holy Spirit in this process.  I think that’s part of the reason why this interim report was released to the public — so that some bishops could score some political points with the Church’s critics.  It’s their way of getting some political cover by implying, “You see!  I did try to represent your viewpoints but the magisterium didn’t listen.”  Unfortunately, I think some bishops are aiming more to increase the Church’s likability by bending her teachings to the whims of society and not through explaining her truths.

I don’t think there will be a radical rewriting of Church doctrine when this is all over and many of the bishops know that.  So those who may have ulterior motives other than fostering dialog may want their viewpoints made public so that they can become a talking point or be used in a counter argument in future debates.  Unfortunately, our society (the media in particular) has an uncanny way of turning “this was mentioned in the synod” into “this is what the Catholic Church believes.”  And over time, the context certain statements were made in will be completely lost and all you’re left with is a soundbite from Nancy Pelosi quoting the interim synod report and misrepresenting Church doctrine.

Like St. Simeon in the Fourth Joyful Mystery of the rosary, we must show patience for this process.  St. Simeon had faith that he would one day see God’s Chosen One.  We too must have faith that the truth of Jesus Christ will not only reveal itself, but will burn more brightly when held up against weaker ideas.  We pray for patience with the Church, both personally and for a patience from the greater society to not misrepresent the Church’s teachings.  We also need to pray for the bishops and all those taking part in the synod that they let the Holy Spirit guide their thoughts and actions.  And we must pray especially for those bishops who may treat their vocation as a political office rather than spiritual shepherds.