Upon being elevated to the cardinalate on Feb 18 in Rome, Cardinal Dolan of New York said he has a long way to go spiritually.  He said to reporters:

We could learn a lot from Cardinal Dolan’s remarks.  Here is someone who has ascended to one of the highest ranks in the Catholic hierarchy and yet is humble enough to know that he still has a long way to go.  He understands that it’s not his rank that brings him into God’s grace, but his actions.  Cardinal Dolan shows us that we are all called to live as saints whether you are the pope, a priest, a nun, or the average lay person.  If we truly believe in our faith and that living in God’s grace leads to internal happiness in Heaven, then striving to imitate saint-like behavior should be our top priority.

The good news is that anyone can become a saint.  Just look at history.  Saints came from all walks of life whether it be a mother, father, peasant, king, priest, soldier, slave, or repentant sinner.  St. Peter denied he even knew Jesus before becoming the cornerstone of the Catholic Church as our first pope.  St. Paul actively persecuted Christians before reforming his ways, preaching the message of Jesus Christ, and writing letters that became the bulk of the New Testament.  If people like that became saints then realistically there is nothing preventing any one of us from becoming a saint.  The question is, do we have the will and desire to at least try to imitate the saints’ behavior?

Unfortunately, society does not make imitating the saints an easy task.  Many became saints through martyrdom.  Many more had to abandon their lives of material comfort.  But in addition to the physical sacrifices needed to be a saint, there is also a sociological barrier one must overcome.  Society conditions people to believe that saint-like behavior is old-fashioned, goes against normal human behavior, and in some cases, is deeply wrong and immoral.

Various sins have become so commonplace that you are lead to believe it is OK to commit them.  Don’t go to Mass on Sunday?  Don’t worry, you’re in the majority of Catholics.  Don’t regularly receive the Sacrament of Reconciliation?  Who cares, most people don’t receive it anymore.  Why not “live a little” and go on that drunken bender at a strip club with your buddies?  It’s not like you’re a priest or something.  Trying to defend the life of the unborn?  You monster!  And there is the current infantile excuse du jour — artificial contraception is fine since 98% of Catholics use it.  Sometimes I think the early saints got off easy being arrested and fed to lions.  When faced with a monumental challenge like possible martyrdom, people often find the spiritual resolve to endure.  But in today’s world we must navigate a moral minefield as we are constantly bombarded with all these sins disguised as normal human behavior.  The threats are so subtle that we often let down our defenses and fall into sinful patterns of behavior. 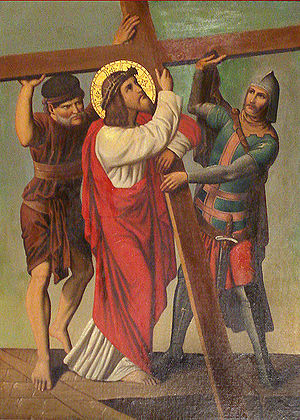 In order to keep up our defense against sin, we must turn to the rosary.  When we think about imitating the saints we should remember the Fourth Sorrowful Mystery of the rosary — Jesus Carrying His Cross.  Jesus endured great hardship after being arrested, tried, scourged, and mocked.  Despite the torture of carrying the cross and falling down repeatedly, Jesus got up because He knew it was important to do God‘s will above all else.  And that is what many of the saints did as well — carried out God’s will even when society thought their actions were silly, unreasonable, and even dangerous.  And that is what God asks of us — to take up our crosses and follow Him even when society mocks us and encourages us to do the opposite.

We should also remember the Third Luminous Mystery of the rosary — Jesus’ Proclamation of the Kingdom of Heaven and a Call for Conversion.  In this season of Lent, really examine your life.  Now look at the lives of the saints (Need help?  Try this book from Amazon).  What is your game plan to bridge that gap between where you are now and where you hopefully want to be?  What small conversions can you make this Lent to become more saintly?  I’m not saying that we will all be saints come Easter, but there is no better time to at least start the conversion process.  Every journey starts with an initial, small step.  What will yours be?