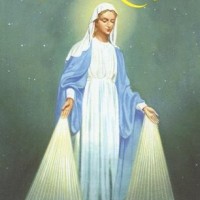 Saint Louis-Marie Grignion de Montfort (31 January 1673 – 28 April 1716) was a FrenchRoman Catholic priest and Confessor. He was known in his time as a preacher and was made a missionary apostolic by Pope Clement XI.[1]

As well as preaching, Montfort found time to write a number of books which went on to become classic Catholic titles and influenced several popes. Montfort is known for his particular devotion to the Blessed Virgin Mary and the practice of consistently praying the Rosary.

Keep in mind that the average Catholic in the 17th century didn’t have EWTN media, the internet, and RosaryMeds to help them learn about the beauty and power of rosary prayer.  Saint Louis de Montfort basically wrote one of the first howto guides to praying the rosary and spelled out its benefits by telling stories of miraculous events people experienced when they devoted themselves to rosary prayer.

Not to be overly self-promoting, but I was amazed by the similarities between my book, The Rosary for the Rest of Us, and The Secret of the Rosary.  Both books touch on recommended ways of praying the rosary, the benefits Mary promised those who pray it, and even some of the challenges you might face trying to form a rosary praying routine.  Of course, Saint Louis de Montfort had years of theological study in a seminary and was a librarian so he had a lot more spiritual and historical knowledge to draw from for The Secret of the Rosary than I have for RosaryMeds.  Still, I am proud that The Rosary for the Rest of Us overlaps in subject matter with a book written by a saint!  Also, you won’t find commentary on each rosary mystery (not to mention that the Luminous Mysteries didn’t even exist in de Montfort’s time) in The Secret of the Rosary like you find in The Rosary for the Rest of Us.

The Secret of the Rosary provides a nice little kick of motivation to those who may feel a bit weary after praying the rosary day after day, week after week, and year after year.  Saint Louis de Montfort acknowledges many of the challenges associated with praying the rosary such as finding the time, finding it tedious, mindlessly going through the prayers, wanting to give it up, etc.  Evidently, a 17th century Catholic faced nearly all the same challenges a 21st century Catholic faces about achieving fruitful prayer.  But he offers a sense of hope and infuses a sense of pride for keeping up with rosary prayer even when it is hard.  In the book, he writes:

Even if you have to fight distractions all through your whole Rosary be sure to fight well, arms in hand: that is to say, do not stop saying your Rosary even if it is hard to say and you have absolutely no sensible devotion. It is a terrible battle, I know, but one that is profitable to the faithful soul. If you put down your arms, that is, if you give up the Rosary, you will be admitting defeat and then, having won, the devil will leave you alone.

He often talks about the struggle of good vs. evil, God’s final judgement, and other personal encounters people had with Mary about rosary prayer.  Unlike today’s white-washed view of evil, 17th century Catholics weren’t afraid to acknowledge the terrible reality of Satan and Hell.  When de Montfort writes about the dire consequences of falling into sin and the rewards for remaining in God’s grace, you can’t help but see the rosary in a new light.  No one who reads The Secret of the Rosary can possibly think of the rosary as a silly little necklace or just mindless repetition of prayers when you know all the good it has produced and how many souls it has saved.

I think everyone will take away at least one action item from this book.  For example, I realized that I need to slow down and take my time praying the rosary.  Often, I try to “beat the clock” and get through all five mysteries and additional prayers before arriving at work on my morning commute.  When I know I’m getting close to my office complex, I tend to speed up the prayers in a mad dash.  After reading The Secret of the Rosary, I now realize that there isn’t really no point in racing through Hail Marys so I can check off praying the rosary on my daily todo list.  Essentially, Mary cares more about the quality of your prayers, not the quantity.

Oh, one last point about The Secret of the Rosary.  It’s a fast read.  Each chapter (or Rose as de Monfort calls them) is only a few paragraphs.  So you really don’t have to dedicate a lot of time to the book.  You can read a few chapters a day almost like a daily prayer book.