Picture this.  You’re watching a football game and in the middle of a play some yahoo, frustrated with his team’s performance, jumps from the stands and runs on to the field.  He manages to take the ball from the quarterback and runs into the end zone.  He spikes the ball and declares that he’s such a great football player.  Meanwhile, his drunken friends in the stands are also cheering him on by telling everyone just how great of a football player their friend is.  However, that fan’s shenanigans ultimately do not mean anything. His touchdown wouldn’t count for either team, and his effort would not go down in any official record book.  And no amount of cheer leading or yelling from either him or his friends would change the fact that he is not an actual football player that has an effect on the outcome of the game. 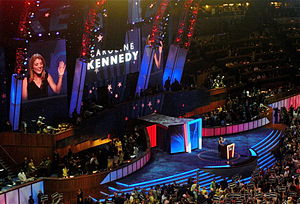 And so we shift from football to the Democratic National Convention.  Here we have Obama and other Democrats cheer leading for their base.  Many people who spoke basically said, “Look at us! Look at how compassionate and pro-life Obama and the Democratic party is!”  But like the yahoo who ran onto the football field acting like a football player (and his drunken friends who echoed that claim), simply proclaiming you are compassionate and pro-life doesn’t make you so.

For example, we heard Caroline Kennedy say how a women’s reproductive health care is under attack because of the stricter abortion laws passed in many states.  She said that her Catholic faith would not allow her to support such laws.  I don’t know what theology class she took or what priests she consulted, but the Catholic Church is definitively against abortion in all forms.  Implying that the Church supports abortion in any way is a gross distortion of the truth and is scandalous because it misleads other Catholics who aren’t educated in their faith.

But the real woppers came from former congresswoman, Kathy Dahlkemper.  She went one step further than Caroline Kennedy and actually tried to make the argument that Obama is pro-life and that ObamaCare is the most pro-life piece of legislation ever passed in the Unite States.  Her words were:

So when people criticize Obama for his record on abortion, she continued, “you can turn on them and say, ‘He is pro-life.'”

Well that settles it.  There is no more debate.  Obama is pro-life because someone said so.  Never mind any of the hidden abortion funding in ObamaCare, the HHS contraception mandate, federal funding for embryonic stem cell research, the cancellation of federal funds for adult stem cell research, and the attacks, blackmail, and extortion from the federal government towards any state that tries to restrict abortions or defund Planned Parenthood.  Never mind the glowing endorsement Obama got from Nancy Keenan, president of National Abortion Rights Action League Pro-Choice America (NARAL), at the start of the DNC.  Never mind what Obama and the liberal left do, they are pro-choice, pro-life, whole-life, no-life, and whatever else they want you to think they are… because they say so. 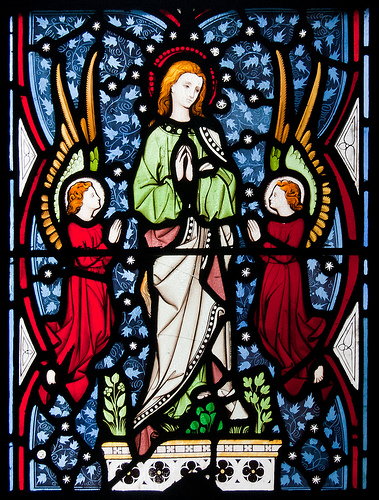 The twisting of facts and the outright lies at the DNC regarding contraception, abortion, and the teachings of the Catholic Church remind me the importance of the Fourth Glorious Mystery — Mary’s Assumption.  We remember in this mystery that Mary calls us to forge a deeper relationship with her son, Jesus Christ.  Part of forging this relationship is coming to know Jesus as the Truth and not distort it to fit our wants and desires.  But this is an understanding we only receive when we pray, read the Bible, learn the Catechism and tradition of the Catholic faith, receive the sacrament of Reconciliation, and receive the Eucharist.

There will be many people and groups that will try to confuse you and distort the truth in the upcoming weeks.  The Caroline Kennedys and Nancy Pelosis of the world will try to use their twisted view of the Catholic faith to serve their political ends instead of allowing the Holy Spirit to guide them in making wise decisions.  It is so important to make an effort to learn and understand your faith so that you won’t be swayed by anyone’s empty words, promises, and distortions.

I think it’s fitting to end with a small prayer:

Oh Lord, be with us now in this time when Your Word is so distorted or ignored in this world.  May we seek the guidance of Mary, the Holy Spirit, and the angels and saints to understand Your Truth and find the energy to follow it.  We pray for the conversion of those who choose to speak in Your Name to solely fit their personal ends instead of humbling themselves to truly listen and follow You.  Amen.

One thought on “Because I said so…”