The mainstream media made a lot of hay over a non-event recently.  As many of you have heard or read, Pope Francis gave a very candid 80 minute interview when he was flying back from World Youth Day in Brazil.  The media ran with the pope’s statement about homosexuality.  He said:

When I meet a gay person, I have to distinguish between their being gay and being part of a lobby. If they accept the Lord and have goodwill, who am I to judge them? They shouldn’t be marginalized. The tendency [to homosexuality] is not the problem … they’re our brothers.

And so World Youth Day, when literally millions of Catholics publicly celebrated their faith, was unfortunately overshadowed in the media by a few sentences in an interview.  The mainstream media basically buried an event where nearly three million Catholics attended Mass on the last day of the week-long celebration and young Catholics from around the globe excitedly displayed their faith.  The press thought that they heard a change in Catholic teaching regarding homesexuality when all the pope was doing was stating what the Church has taught for centuries — hate the sin, love the sinner, and it’s no one’s place to judge but God.  Maybe, if the press actually covered and fairly analyzed World Youth Day, they would have realized that what Pope Francis said in that interview was exactly the teachings millions celebrated that entire week.  I’m not going to go into more details over the way the mainstream media misreported on the pope’s comments.  If you want to read about that, you can see a good summary in the National Catholic Register.

The media’s misunderstanding and misreporting on the Catholic Church shows just how important it is to continually learn about your faith.  So many people disagree or criticize the Catholic Church, not on what it teaches, but on what they think it teaches.  And many Catholics either fall away or become disengaged (that’s code for Christmas and Easter Catholic) from the Church on a false premise.  And who can blame them?  Late night TV hosts, comedians, politicians, and the media are the ones who paint the picture of the Catholic Church for most people.  Are they presenting the Church that was on full display on World Youth Day or the one out of a Dan Brown novel?  No wonder so many people fall away or attack the Church when they learn more about it from John Stewart or Jay Leno than the pope, their priest, or the parish community.  Our silence on the authentic teachings of the Church creates a vacuum that the modern media and entertainment companies more than happily fill with their agenda. 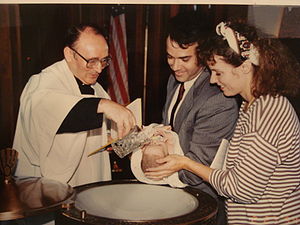 Society suffers from a severe case of falseteachingitis.  The main symptom is hallucinations of a Catholic Church that doesn’t really exist.  It’s very dangerous because those hallucinations prevent people from receiving regular doses of God’s grace.  It’s a vicious downward spiral where confusion leads to hatred which in turn leads to more confusion and more hatred about the Church’s teachings.  The antidote is rosary meditation and prayer especially on the First Luminous Mystery — Jesus’ Baptism in the Jordan.  We must remember that we promised (or someone promised for us) to faithfully follow the teachings of the Catholic Church.  That implies that we must learn those teachings.  And by learning, I don’t mean watching a special on the History Channel about someone who think he knows where the Ark of the Covenant resides.  I’m talking about actually sitting down and reading the Bible (or listening to it), participating in (not just attending) Mass every Sunday, receiving the sacraments, and reading the Catechism and other Church documents.  In short, we honor our baptismal vows by centering our lives around our faith instead of pushing it off to the side.  When we actively learn, pray, and participate in our faith as a community, we leave no gaps in understanding that others can fill with falsehoods.

Here are our baptismal vows.  They are similar to the Apostle’s Creed we recite at the beginning of every rosary or Nicene Creed we recite during Mass.  But often we may say the words on auto-pilot without really thinking about what they mean.  We shouldn’t make any promise lightly, especially one we make before God.  Read and meditate on this prayer.  Ask yourself how well you are living up to this promise.  And are you publicly living these vows so that others witness the true Catholic Church?

Do you renounce sin, so as to live in the freedom of the children of God?

Do you reject the lure of evil, so that sin my have no mastery over you?

Do you reject Satan, the author and prince of sin?

Do you believe in God, the Father almighty, creator of heaven and earth?

Do you believe in Jesus Christ, his only Son, our Lord, who was born of the Virgin Mary, suffered death and was buried, rose again from the dead, and is seated at the right hand of the Father?

Do you believe in the Holy Spirit, the Holy Catholic Church, the communion of saints, the forgiveness of sins, the resurrection of the body, and life everlasting?

And may almighty God, the Father of our Lord Jesus Christ who has given us new birth by water and the Holy Spirit, and bestowed on us forgiveness of our sins, keep us by his grace, in Christ Jesus our Lord, for eternal life.