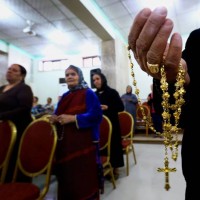 I know many readers are probably put off by now about my recent political commentary even if you sit on the same side of the political aisle as I do.  But like I said in previous posts, we live in the real world and rosary prayer and meditation need to play a part in it.  Rosary prayer cannot be something detached and isolated from the other parts of our lives.  It is meant to fuel us and guide us through our our lives, especially the hard parts.

We should turn our prayers toward what is happening in Iraq right now.  Since January, 1.2 million people have been displaced by ISIS and other radical groups.  One group that was already being actively persecuted in the region before January, but are now targeted to a heightened degree is the region’s Christian communities.  Rev. Andrew Write, an Anglican pasture in Baghdad, said “It is as if hell has broken out here and nobody cares.  The situation is so serious and it is very easy to feel forgotten.”

Iraq is just one of many places where Christians have been driven from their homes with nothing but the shirts on their backs.  In some places, they are beheaded or even crucified!  Over the last few years churches that have stood for hundreds of years were shut down, vandalized, or destroyed throughout Syria, Egypt, Libya, and other countries.  By some measures, Christians are now the most persecuted group in the world, but as Rev. Write said, nobody cares.

I’m really not qualified to give a detailed analysis of international politics and why there isn’t a more vocal outrage over the world’s besieged Christians.  But here are some of my thoughts.  In the developed world, when we think of Christians we have the image of nicely dressed people attending a suburban church and then going to a nearby coffee house for pancakes and omelets.  Or we think of the majesty of St. Peter’s Square.  Some stereotypical images of the Spanish inquisition, European witch hunts, or the Crusades might come to mind.  Throw all these perceptions together and it forms a picture of a group of people who don’t need any help at best, or are getting what they deserve at worst.

But in much of the world, the Christian communities are no different from the non-Christian communities around them.  It’s not like Christians in Iraq are some wealthy, powerful group that are being toppled by a desperate underclass.  They are farmers, shopkeepers, employees in some business, mothers, fathers, and children just like everyone else.  Their day to day lives are no different from those around them except maybe they have different diets and worship habits.  They don’t have a direct connection to the politics or history of Christianity.  And yet, in their moment of need, many in the international community are silent because of their perception of who Christians are.

Jesus challenges us to help one another personally.  One of my readers commented about my previous article on how Jesus offered a place for those who were left out of the normal hierarchy.  Jesus didn’t espouse politics nor catered to a specific group of people.  Yes, he taught mostly amongst the Jews, but His message was for everyone regardless of religion, ethnicity, time, or place.  We look at the Third Glorious Mystery, Pentecost, where the Holy Spirit gave the apostles the courage to go out and teach Jesus’ message to all the world.  And while they preached the Word to religious and political leaders (since they would have the most influence) they also taught to the masses and spread the Word as individuals to individuals.

Individuals helping individuals is the core of Jesus’ ministry.  Yes, we still must lean on our governments and religious leaders to help.  After all, it’s religious and government institutions that have the best infrastructure to deliver aid effectively.  And yes, we must pray for those who are feeling so alone and abandoned as forces of evil drive them from their homes and kill them.  But prayer is not the end of our role in helping those in need, it’s the beginning.  Jesus didn’t want people to pray and then wait for governments and religious leaders to officially adopt His Word before living the Gospel.

Now it’s not like we can jump on the nearest plane to Iraq and drive from the airport to the area where Christians have fled.  But we can still help on a personal level.  Please consider donating to the Catholic Relief Services as they do have the means of reaching out to those undergoing hardships that we will (hopefully) never know.